November:
My first sled run this season was on November 30th. This was also my first run with Jasper full grown. We did a couple of miles of trail in the Lowell State Game Area. I was blown away by the faster speed Jasper brought us up to. I also quickly remembered why I didn't really do much skijoring or sledding in the game area last year, to many hills with sharp turns and big trees at the bottom! We finished the run with a pretty big wipe-out, on a long steep downhill, that left me with a nice bruise on my hip. Perfect Start!

We Continued to run almost daily at the Wittenbach Center with a couple nice runs at Ionia Rec. area and Aman park.

December:
In December we headed north! We were in the UP from December 17th - 23rd. Our first stop was at Tahquamenon Falls SP. We arrived really late at night (which seems to be our custom), found a camping spot easy enough, as we were the only people in the park. 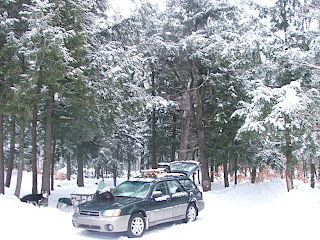 The temps got down around 15 deg. which allowed us to try out our new Marmot 0 deg. Sleeping Bags. Combined with two huskies they worked great, I woke up in the middle of the night sweating.

Shortly after starting down a
unbroken trail with Brigid in front of us on skis, I decided the dogs and I should go in front, as I was having trouble holding them back. We shot off ahead of Brigid, down hills and around curves, then snap - I twisted up over something and broke the runner on our kicksled! I was bummed, I had hopped to do a lot of sledding on this trip (which had just really started), but we both had skis and skijoring equipment, so we were ok.

After Tahquamenon we headed west stopping in Newberry for lunch. We had reserved a cabin in the west unit of the Hiawatha Nation Forest at the Hiawatha Resort and Country Store near Wetmore/Munising.

In Wetmore our goal was to meet up with Fred Powers and Jennifer Lackie who run Wilderness Trail Outfitters. Their place is located in the middle of the Hiawatha National Forest. Our first day there we met Jennifer and she let us access their grommed trails and set us up with a route we could skijour on. It was real hard going - they had at least two feet of snow on the ground. They had used snowmobiles to groom the trails, so we were in and out of the ruts created by the runners. Besides the difficult trail I was on a little on edge, as I knew Fred had three teams of dogs out on the trail and he had no idea that we where out there! The day ended well, we had alot of fun and never ran into any other dog teams on the trail.
For the next couple of day we bummed around Munising and Marquette. We checked out Pictured Rocks, looked at a couple sections of the North Country Trial as well as the Valley Spur and Bay de Noc - Grand Island Trails. Eventually, we got a chance to meet up with Fred, he showed us around his dog yard and shared some of his insights on life, dogs and mushing with us. Fred and Jenifer live a really interesting life, we were real glad to have met them. Aditionally, Fred came through for us by letting us borrow an old sled to run the dogs on. We ended up buying this from him for $50 (which I had won the majority of the night before at a casino in the town of Christmas Michigan).